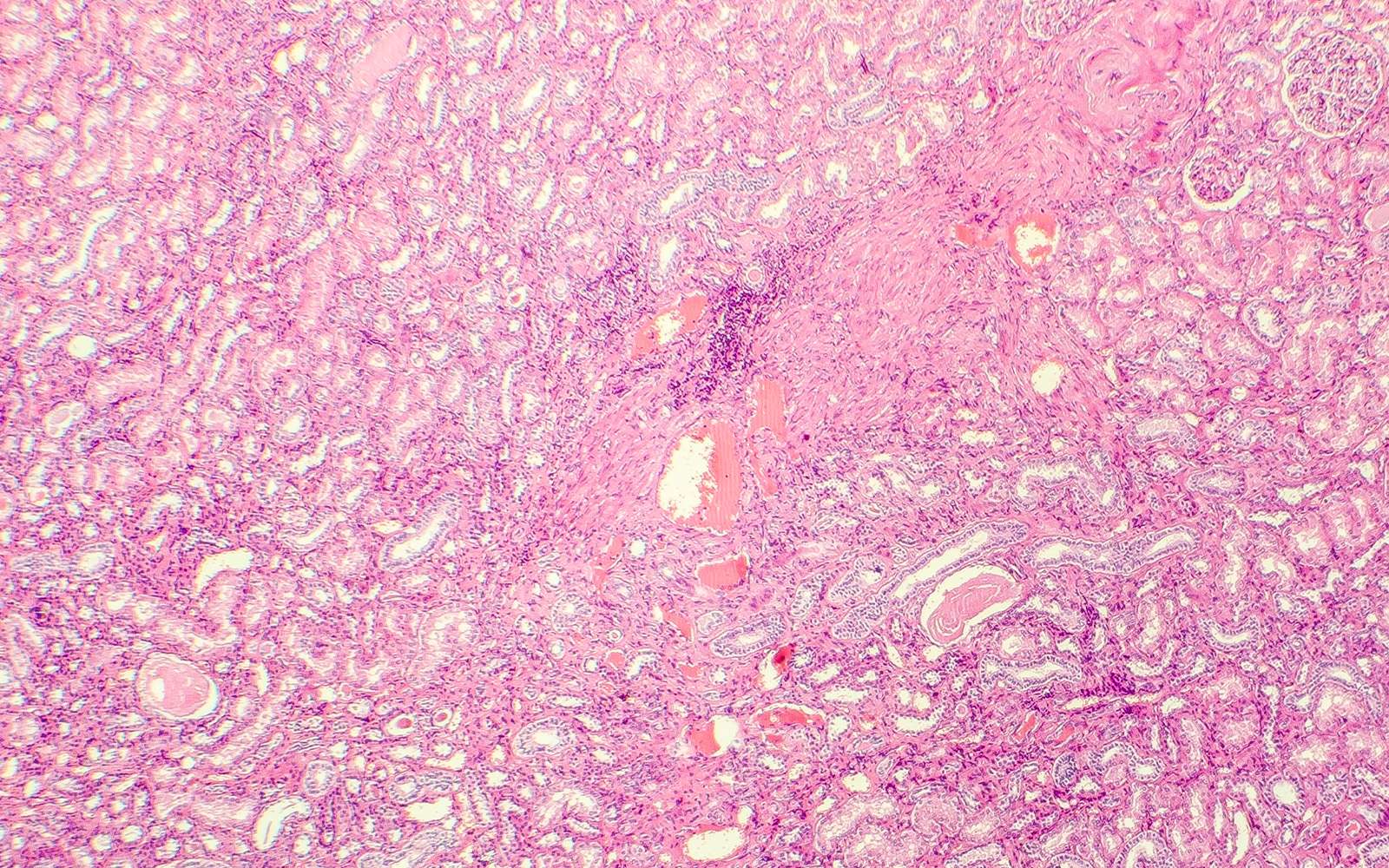 Diabetes is the most common cause in patients with chronic kidney disease (CKD). Both patients with type 1 and type 2 diabetes are at increased risk of developing diabetic kidney disease (DKD), which is characterized by accelerated deterioration of renal function and albuminuria (due to endothelial dysfunction). Treatment of blood pressure (e.g., with renin-angiotensin-aldosterone system (RAAS) blockers and diuretics) in addition to lifestyle has significantly delayed the progression of renal and cardiovascular complications in diabetic patients. However, despite standard treatment, diabetics still have a higher risk of developing diabetes, cardiovascular events, and mortality than the general population.

During disease progression, DKD patients show mesangial expansion and thickening of the glomerular basement membrane (GBM). The composition of the extracellular matrix (ECM) in the kidney has been shown to change during disease progression. For example, the IV type collagen in the basement membrane is partially replaced by VI type collagen, which serves as a scaffold for initiating wound healing thanks to its von Willebrand factor domains. Although changes in the glomerulus are the most important histological feature of DKD, tubulointerstitial fibrosis is largely present in the kidneys of DKD patients.

Tubulointerstitial fibrosis is caused by an abnormal shift in the turnover of components of the renal ECM, with formation of collagen and other ECM proteins predominating over degradation. Assessment of collagen formation can identify patients with active fibrosis who are at higher risk for rapid deterioration of renal function and adverse events such as cardiovascular events and mortality.

Currently, there are no antifibrotic drugs, and treatment of patients with advanced DKD relies on dialysis and ultimately transplantation. Biomarkers that add useful information to the currently available risk factors are needed to advance the development of such drugs. Biomarkers of ECM turnover can be used to reflect the effect of antifibrotic agents on tissue status.

How many people have DKD?
Diabetes is the leading cause of CKD and end-stage renal disease in the Western world. About 40% of patients with CKD have diabetes as their primary cause. In the US, more than 8.4 million adults have diabetes and CKD.

How is DKD treated?
The first step in treating diabetic nephropathy is to treat and control diabetes and, if necessary, high blood pressure (hypertension). With good control of blood sugar and hypertension, kidney dysfunction and other complications can be prevented or delayed. Because of the reservoir of nephrons, the diagnosis is usually not made until CKD is advanced. Patients who reach end-stage renal disease require dialysis or a kidney transplant. The main treatments for CKD are medications to regulate blood pressure or treat the underlying causes of the disease (e.g. GLP-1 agonists and SGLT2 inhibitors in diabetes, which have a positive effect on kidney health).

How is DKD diagnosed?
DKD is defined as CKD with diabetes as the primary cause. Patients are diagnosed with CKD when the concentration of creatinine in the blood and/or protein or albumin in the urine is above a certain threshold. Because serum creatinine increases only after the loss of many nephrons and not all patients have proteinuria or albuminuria, better diagnostic tools are needed to identify patients at risk of developing CKD.

THE MEDICAL NEED FOR BIOMARKERS IN DKD

Current diagnostic markers for DKD lack sensitivity. Therefore, novel diagnostic biomarkers can be used as complementary tools to identify patients at high risk for developing DKD or with early disease who can be successfully treated to halt disease progression.

There is also an unmet need for prognostic biomarkers capable of identifying patients at higher risk for progression to end-stage renal disease. Patients with active disease can be selected to enrich clinical trials. A predictive biomarker would identify patients most likely to respond to therapy. This would have a major impact on drug development by reducing the duration, size, and cost of trials.

Biomarkers can also aid drug development by monitoring therapeutic efficacy when their concentration in biological fluids is affected by treatment. A number of diagnostic biomarkers and biomarkers of disease activity in DKD are currently under investigation, but their ability to stratify risk and predict response to treatment is limited. In addition, markers that can predict the development of diabetic nephropathy would be a useful tool for clinicians to identify high-risk patients.

Visit our kidney biomarker portfolio and choose a panel that fits your clinical research or drug development targets!

WHY PROTEIN FINGERPRINT BIOMARKERS IN DKD

Patients with type 2 diabetes are often overweight or obese and therefore suffer from both hyperglycemia and dyslipidemia. Both lead to increased inflammation and overall tissue stress, resulting in increased oxygen consumption and reactive oxygen species (ROS). In addition, obesity promotes both systemic and glomerular hypertension.

The increased inflammation and hypertension both systemically and locally in the tissues leads to mesangial expansion including cell proliferation, glomerular basement membrane (GBM) thickening, and tubulointerstitial fibrosis. Several markers have been developed to investigate the inflammatory component, but tools reflecting changes in tissue homeostasis are lacking.

In the normal extracellular matrix (ECM) of the kidney, ECM proteins are remodeled as part of normal homeostasis, i.e., degraded and replaced by newly synthesized proteins. Collagens are the most abundant extracellular matrix (ECM) proteins in the renal stroma. As a result of repeated or prolonged impairment, the balance between ECM degradation and formation is disturbed, leading to net collagen formation.

Abnormal collagen formation leads to renal fibrosis, which is the most important predictor of end-stage renal disease progression. Protein Fingerprint technology allows quantification of protein fragments generated by ECM turnover directly in serum and/or urine, thus monitoring the processes of fibrogenesis and fibrolysis. 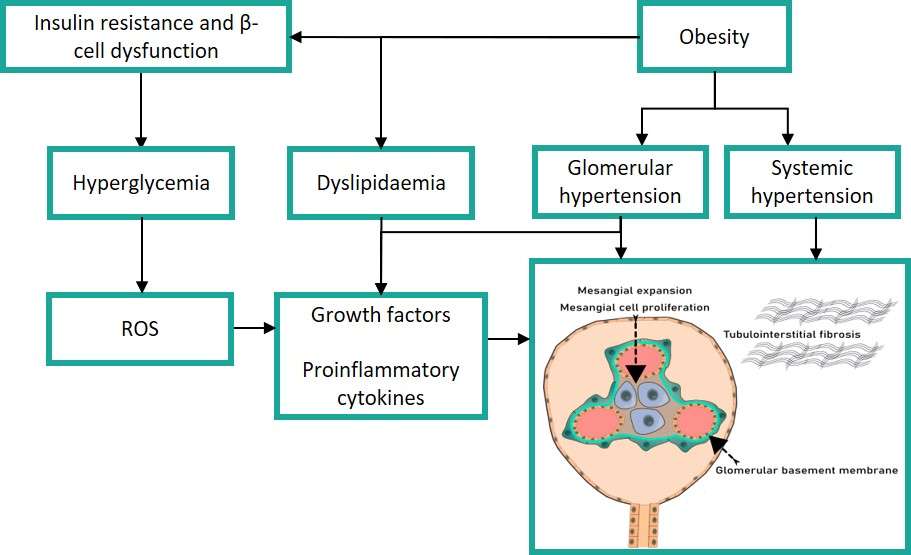 Biomarkers describing the altered turnover of these compartments would allow characterization and quantification of structural changes in the tissue. The ECM in these different compartments is characterized by the presence of different proteins or protein isoforms. Consequently, measurement of specific formation or degradation products would provide information on which compartments are most affected by the disease or treatment. 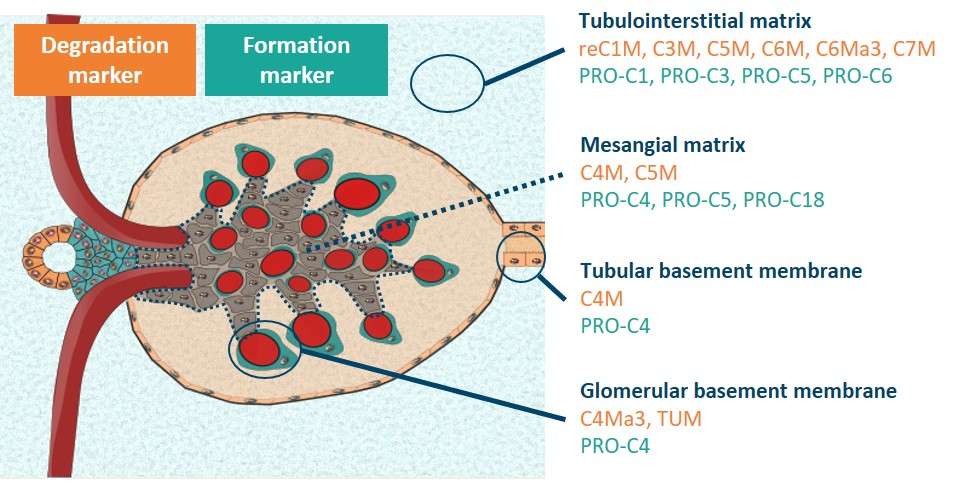 Formation and Degradation Biomarkers in the Kidney

Protein Fingerprint biomarkers measured in serum and urine are either elevated or decreased in CKD patients compared with healthy individuals and correlate with biomarkers of renal function (creatinine, cystatin C, albuminuria) and inflammation (e.g., CRP, IL-6). 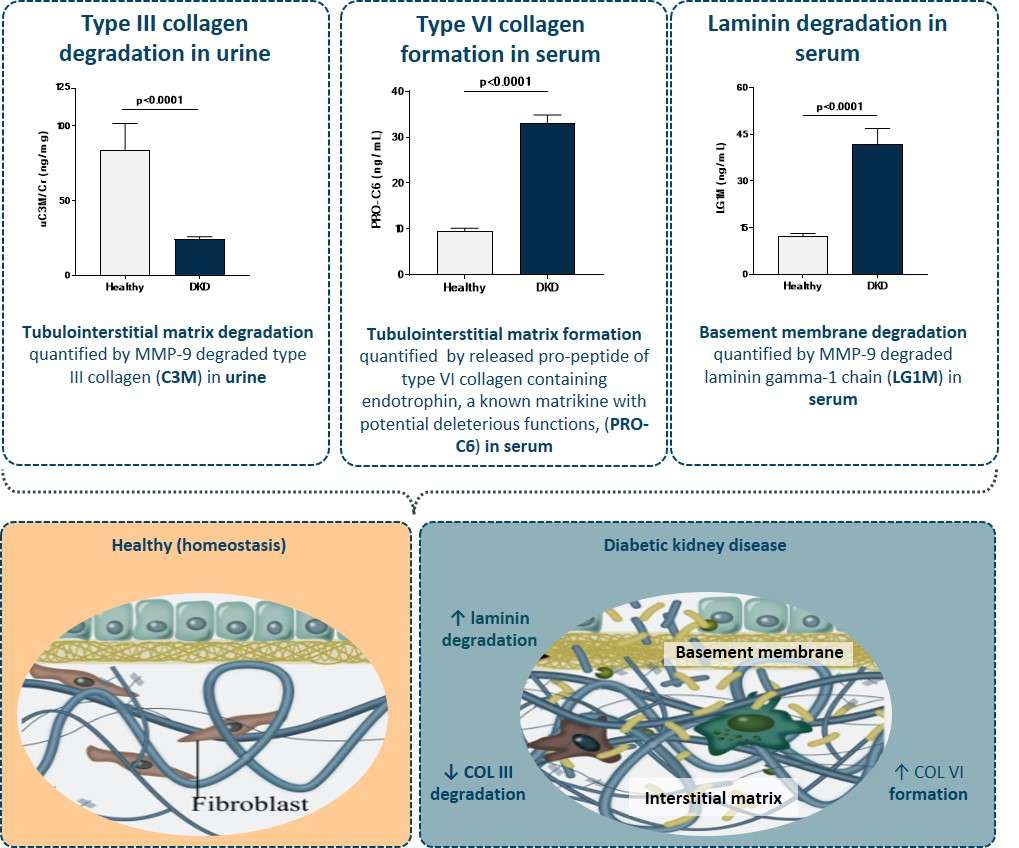 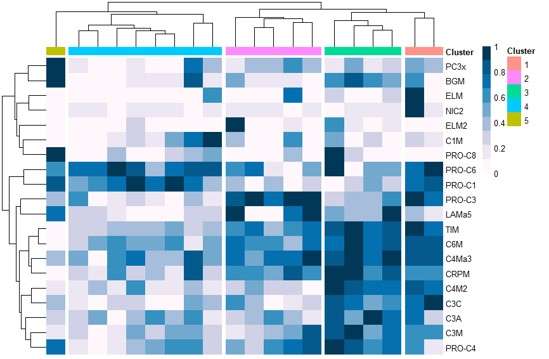 Identification of clusters of patients with different ECM turnover

Identification of clusters of patients with different ECM turnover
Even within the same disease, different endotypes exist that differ in turnover of extracellular matrix proteins. 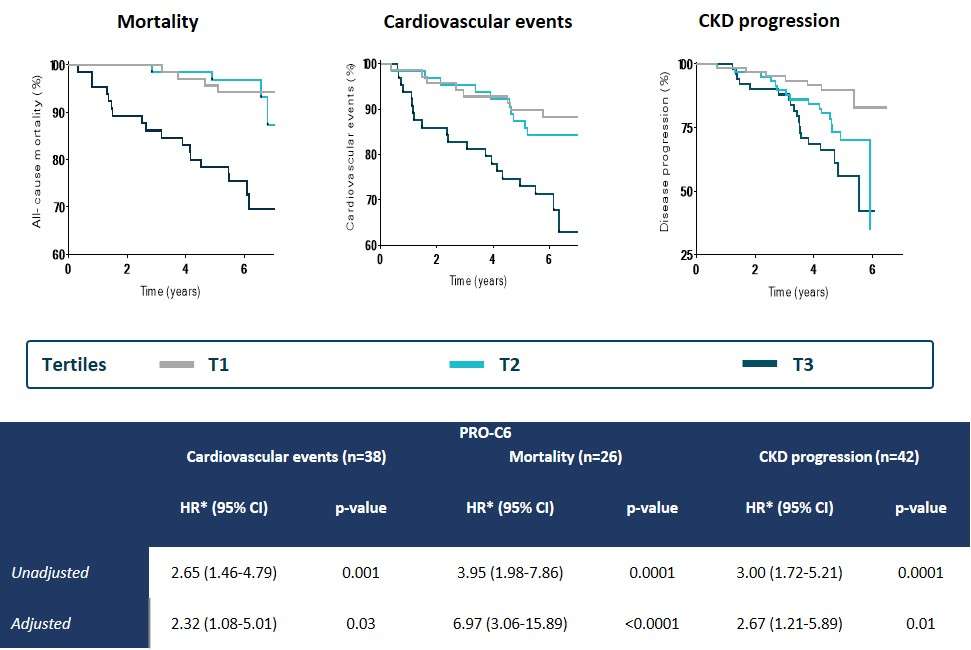 Early modulation of Protein Fingerprint biomarkers following treatment of patients with type 2 diabetes with a GLP1 agonist. Pharmacodynamic biomarkers could assist in dose resolution and information on target engagement/mode of action.

Protein Fingerprint biomarkers at baseline can predict response to treatment by PPARγ agonists (reduction in HbA1c). 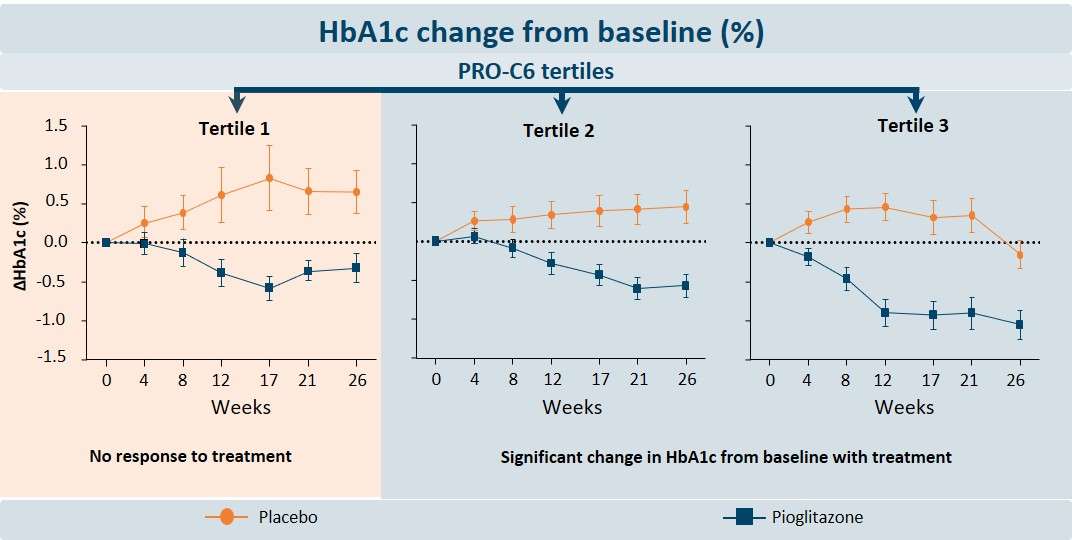