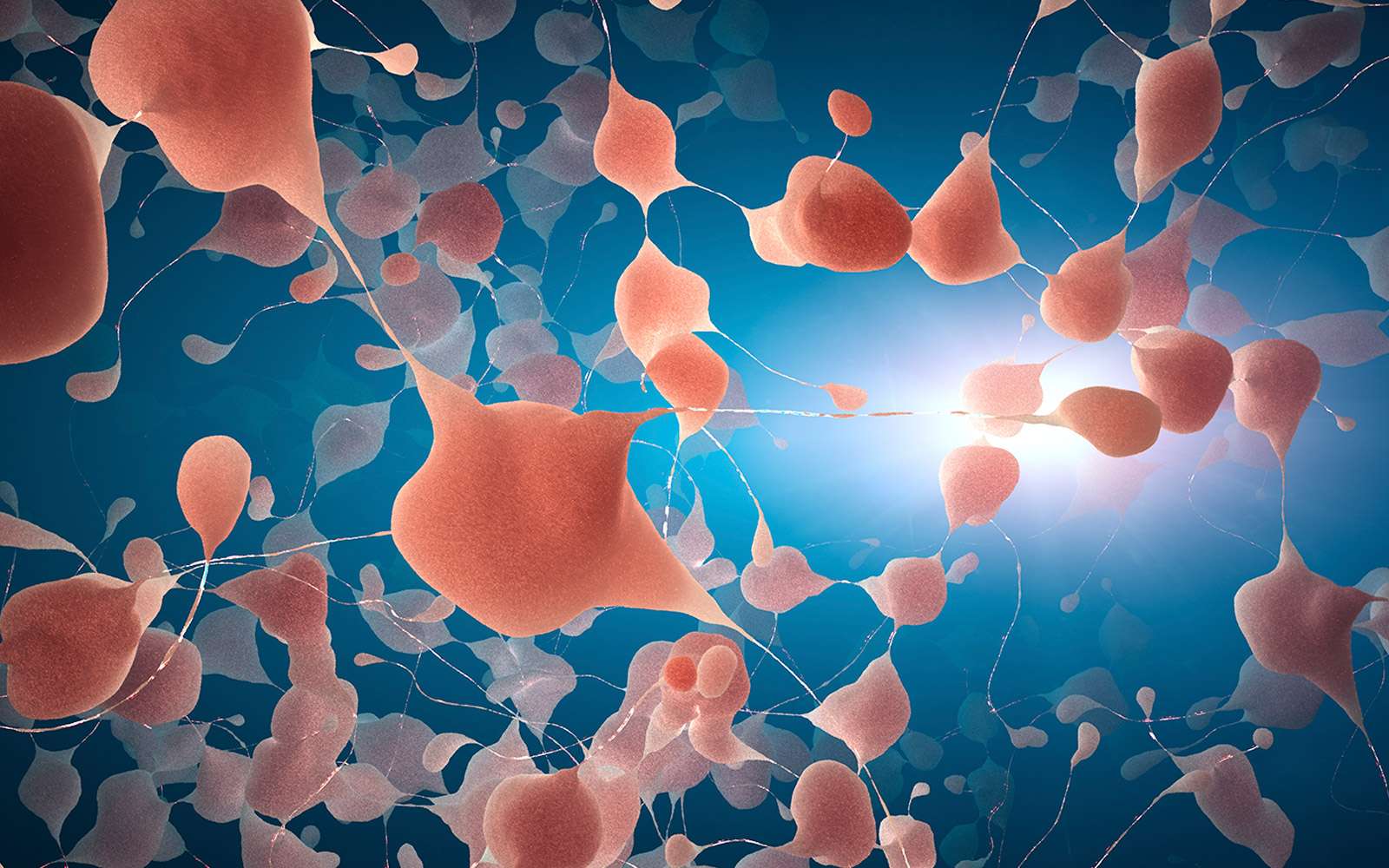 Systemic sclerosis (SSc) is a chronic rheumatic disease with one of the highest mortalities within rheumatology. It is an autoimmune, fibro-inflammatory skin disease characterized by a distinctive triad of microvascular damage (vasculopathy), immune activation with autoimmunity, and generalized fibrosis of multiple organs, including the skin and lungs. The great heterogeneity of disease cause and presentation create considerable challenges in developing treatment and treating patients.

How many have Systemic Sclerosis?
The prevalence of SSc varies considerably around the world. Northern Europe and parts of Asia have a prevalence of >150 per million, whereas southern Europe, North America, and Australia have a higher prevalence of up to 443 per million. As with other autoimmune diseases, women are about six times likely to get SSc than men.

How is Systemic Sclerosis treated?
There is no cure or disease-modifying drug for SSc, but symptoms and inflammation can be treated using NSAIDs, steroids or biologics. The type of treatment depends on the symptoms and organs involved. Several novel drugs are in development targeting either the inflammatory and/or the fibrotic axis.

How is Systemic Sclerosis diagnosed?
A diagnostic blood-based test does not exist, and it is up to the individual physician to diagnose patients based on their symptoms. Skin fibrosis assessed by the modified Rodnan Skin Score (mRSS) and the presence of vascular damage, including Raynaud’s Phenomenon, is included in the diagnostic assessment. Furthermore, the presence of auto-antibodies and pulmonary involvement (either presented as interstitial lung disease or pulmonary arterial hypertension) is included for diagnose.

THE MEDICAL NEED FOR BIOMARKERS IN SYSTEMIC SCLEROSIS

The use of biomarkers is limited in SSc despite substantial research of such biomarkers. Within patient care, there are no biomarkers describing disease severity, activity, and progression or response to therapy. Only routine assessment of autoantibodies as part of the diagnostic criteria is assessed. However, autoantibody status is only useful in the diagnostics, as this is not a static biomarker. Thus, biomarkers for disease severity, activity, and progression are still highly warranted.

In addition, with the increasing number of clinical studies and very limited success with clinical trials, biomarkers could aid in clinical trial advancement. Biomarkers may aid in the identification of patients in most need of treatment, trial enrichment, identification of patients most likely to respond to a given treatment, to reduce trial length, and study population size.

Systemic Sclerosis is characterized by microvascular damage (vasculopathy), immune activation with autoimmunity, and generalized fibrosis of multiple organs, including the skin and lungs. The different organs that may be affected by SSc have tissues consisting mainly of collagens. The collagens are remodeled as part of normal homeostasis of the organ– that is, collagens are broken down and rebuilt as part of normal repair and maintenance of the tissue. In SSc, the balance of tissue remodeling, i.e. formation and degradation of ECM proteins, is interrupted resulting in fibrosis of the organs. Similarly, vascular remodeling leads to increased or disrupted vascularization, which may be detected by increased turnover of the ECM proteins of the vasculature. Protein fingerprint biomarkers can directly quantify this fibrosis and microvascular damage in a serum sample.

While the SSc field has a diagnostic algorithm with autoantibody status, a biomarker with capacity for predicting progression and activity is non existing. There is therefore a medical and drug development need for biomarkers that may to characterize and quantify fibrosis and microvascular damage, predict disease progression and treatment response. The tissue derived Protein Fingerprint biomarkers can be measured in serum and used to accurately quantify changes in tissue turnover in the different joint tissues in the individual patient. 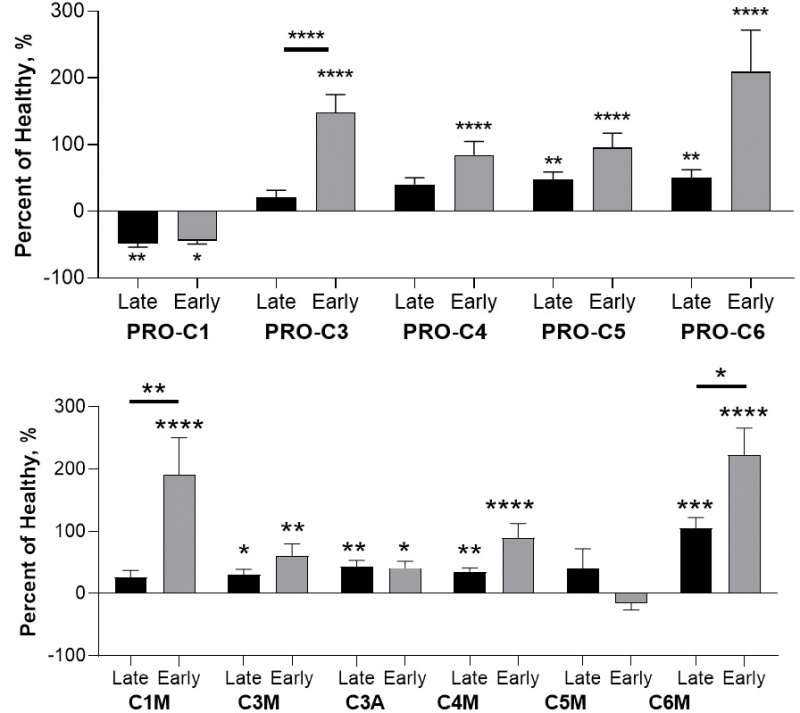 Formation of type III, IV and IV collagens are especially altered with SSc and more in early and diffuse SSc patients compared to late and limited SSc patients.

The fibrotic index of type III collagen measured in serum is associated with mRSS of limited and diffuse SSc patients. Macrophage activation assessed by a protein fingerprint biomarker of citrullinated and MMP-degraded vimentin (VICM) is associated with skin thickness progression rate and early SSc. 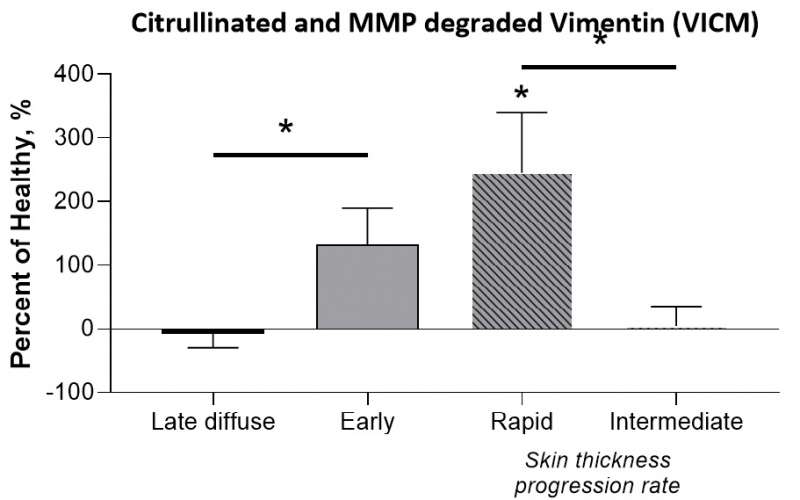 Protein Fingerprint biomarkers allow for testing of anti-fibrotic effects of novel treatments by measuring protein formation fragments in the Scar-In-a-Jar model. Primary dermal fibroblasts are driven into a fibrotic state by growth factors. This fibrotic stimulation may be inhibited by anti-fibrotic drugs, here exemplified by Nintedanib.

We use cookies on our site to enable essential services and functionalities, and collect data in regards to visitor information. This is done in order to provide the best possible experience for the visitor. Cookie policy Privacy statement