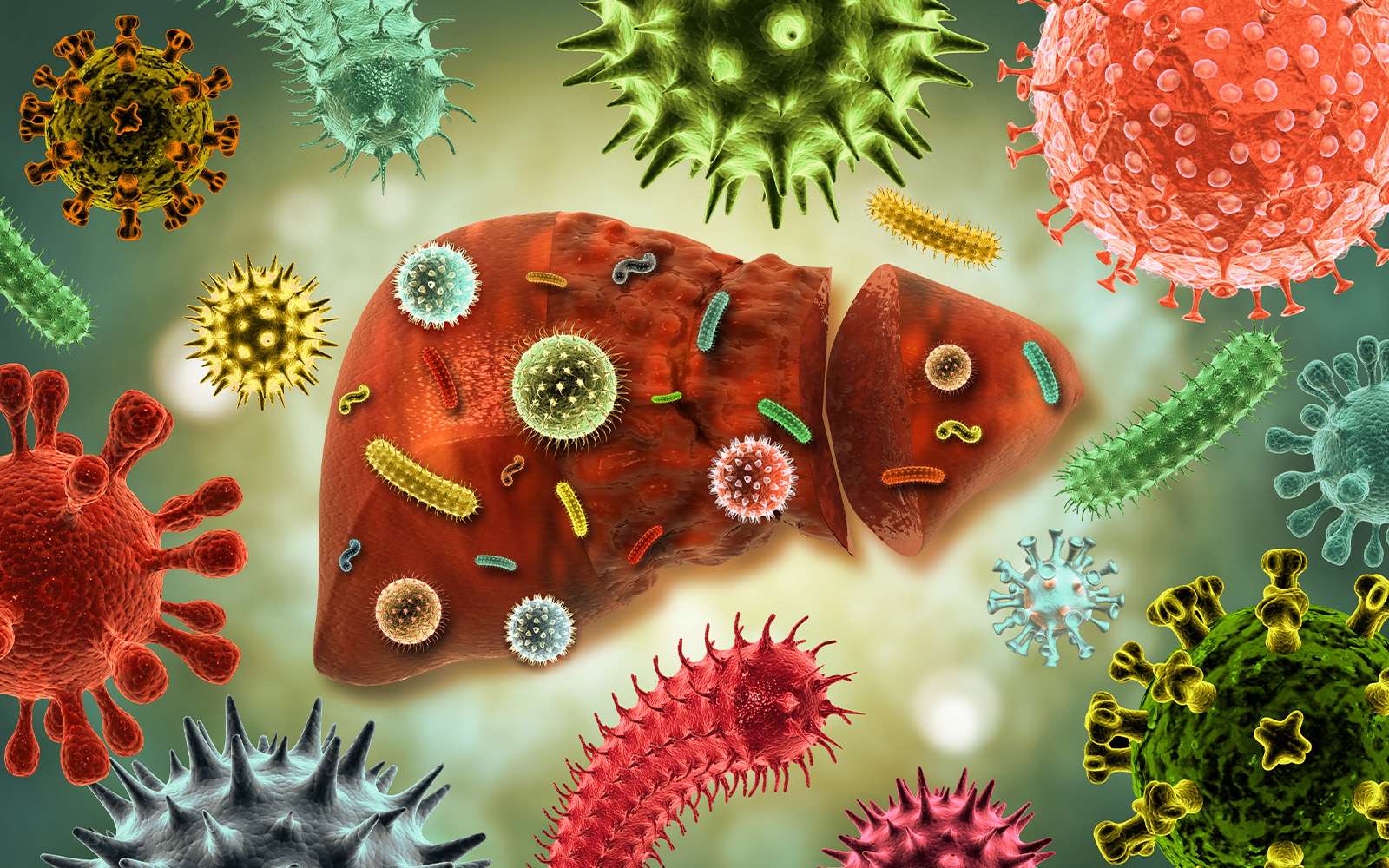 In this section, you will find a description of biomarkers for liver damage caused by viral infection. Our biomarkers can monitor disease activity, pharmacodynamics, and predict response to treatment.

How is hepatitis treated?
Treatment of the underlying viral infection is best. Currently, several antiviral drugs (lamivudine, adefovir, entecavir, telbivudine, tenofovir, emtricitabine, standard and PEG-IFN) have shown to delay the progression of cirrhosis but rarely cure the viral infection. In most cases, therefore, lifelong treatment is required.

How is hepatitis diagnosed?
Diagnosis of hepatitis is based primarily on symptoms. Currently, diagnosis is based on the presence of a viral pathogen and blood tests to assess liver function. If blood tests indicate decreased liver function and advanced liver damage, further testing including imaging and liver biopsies may be required.

THE MEDICAL NEED FOR BIOMARKERS IN HEPATITIS

The medical need for hepatitis biomarkers today is twofold. First, predicting disease progression, especially cirrhosis, has proven difficult. Patients respond differently to viral infections, and predicting which patients will progress and when is currently impossible. Second, there is a need for new treatments that can better control or cure viral liver disease. To achieve this, biomarkers are needed to improve the screening process and the evaluation of treatment efficacy.

Prognostic, predictive, and efficacious biomarkers have the potential to greatly benefit patients by contributing to more accurate clinical trials and by deploying the most appropriate treatment at the right time to prevent end-stage liver disease death.

WHY PROTEIN FINGERPRINT BIOMARKERS IN HEPATITIS?

Viral liver diseases such as hepatitis are characterized by both inflammation and tissue scarring (fibrosis). The liver is rich in various collagens, proteoglycans, and matricellular proteins. These proteins are remodeled as part of liver homeostasis and regeneration. During remodeling, proteins are broken down and rebuilt as part of normal tissue repair and maintenance.

Visit our liver biomarker portfolio and choose a panel that fits your clinical research or drug development targets!

Although there are several diagnostic measures and measures of disease activity in the liver, some are invasive while others have limited predictive power. Therefore, there is still a need in medicine and drug development for biomarkers that can characterize and quantify structural tissue changes and predict disease progression. Tissue-derived protein fingerprint biomarkers of liver function can be measured in serum and plasma and can accurately quantify changes in tissue turnover in the different layers of liver tissue in individual patients. 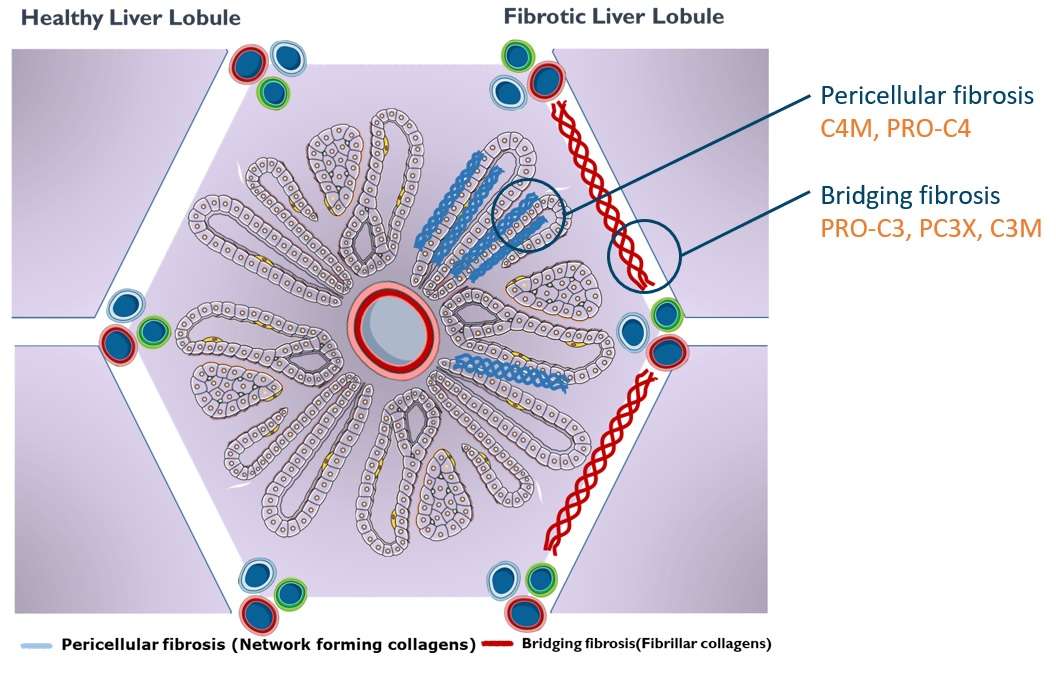 Protein Fingerprint biomarkers measured in serum differ in hepatitis B and C (HBV and HCV). HBV is usually a disease with higher tissue turnover and increased collagen formation and degradation. 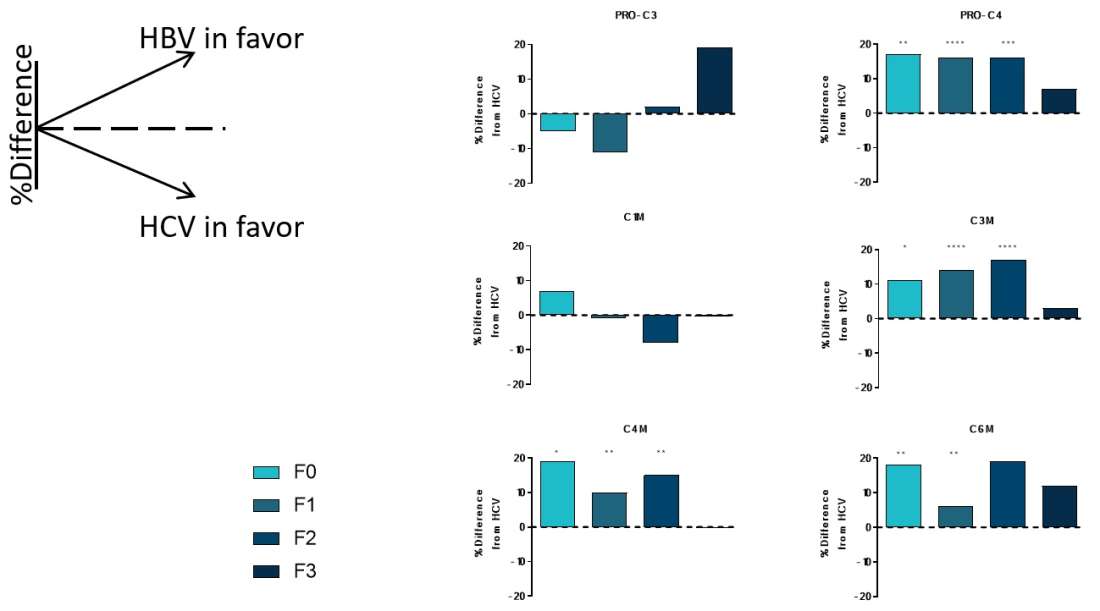 Type III collagen formation (PRO-C3) measured in serum is related to outcome in hepatitis C. PRO-C3 is higher in patients with an outcome compared to none and patients with high PRO-C3 are more likely to have a sooner outcome than patients with low PRO-C3. 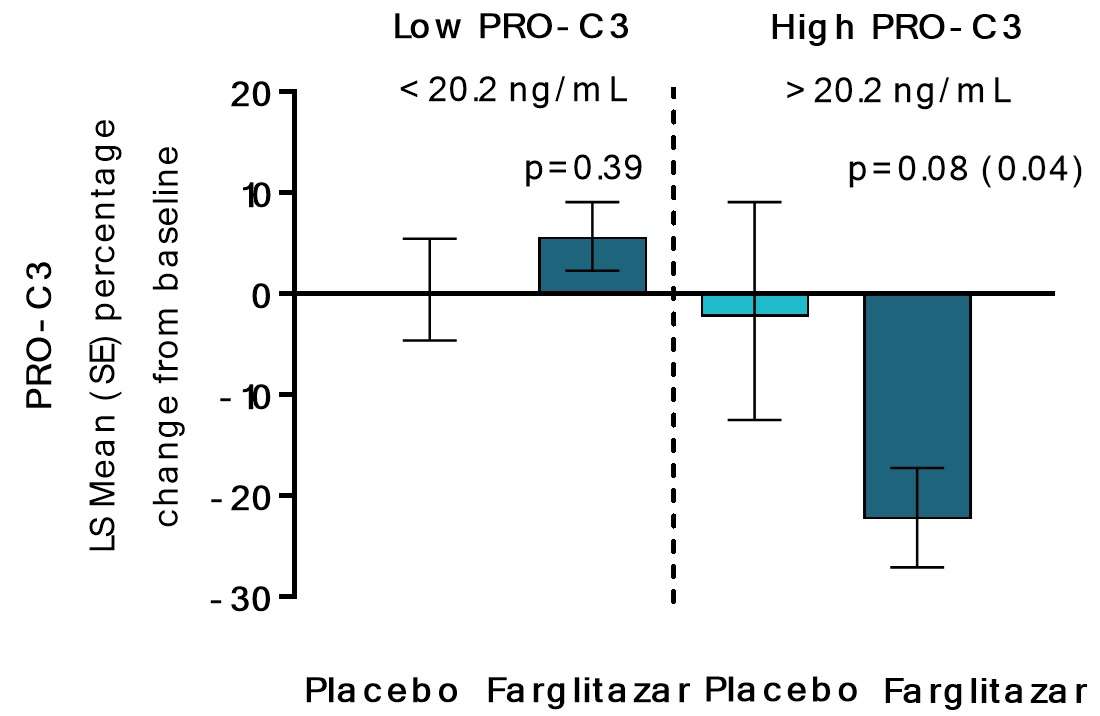 Percentage changes of PRO-C3 in response to Farglitazar treatment

Percentage changes in PRO-C3 in response to treatment with farglitazar depend on baseline PRO-C3.

Baseline PRO-C3 is predictive of changes in ISHAK score in response to treatment with farglitazar in hepatitis C patients.

Percentage changes of ISHAK in response to Farglitazar treatment

Percentage changes in ISHAK in response to treatment with farglitazar depend on baseline levels PRO-C3.