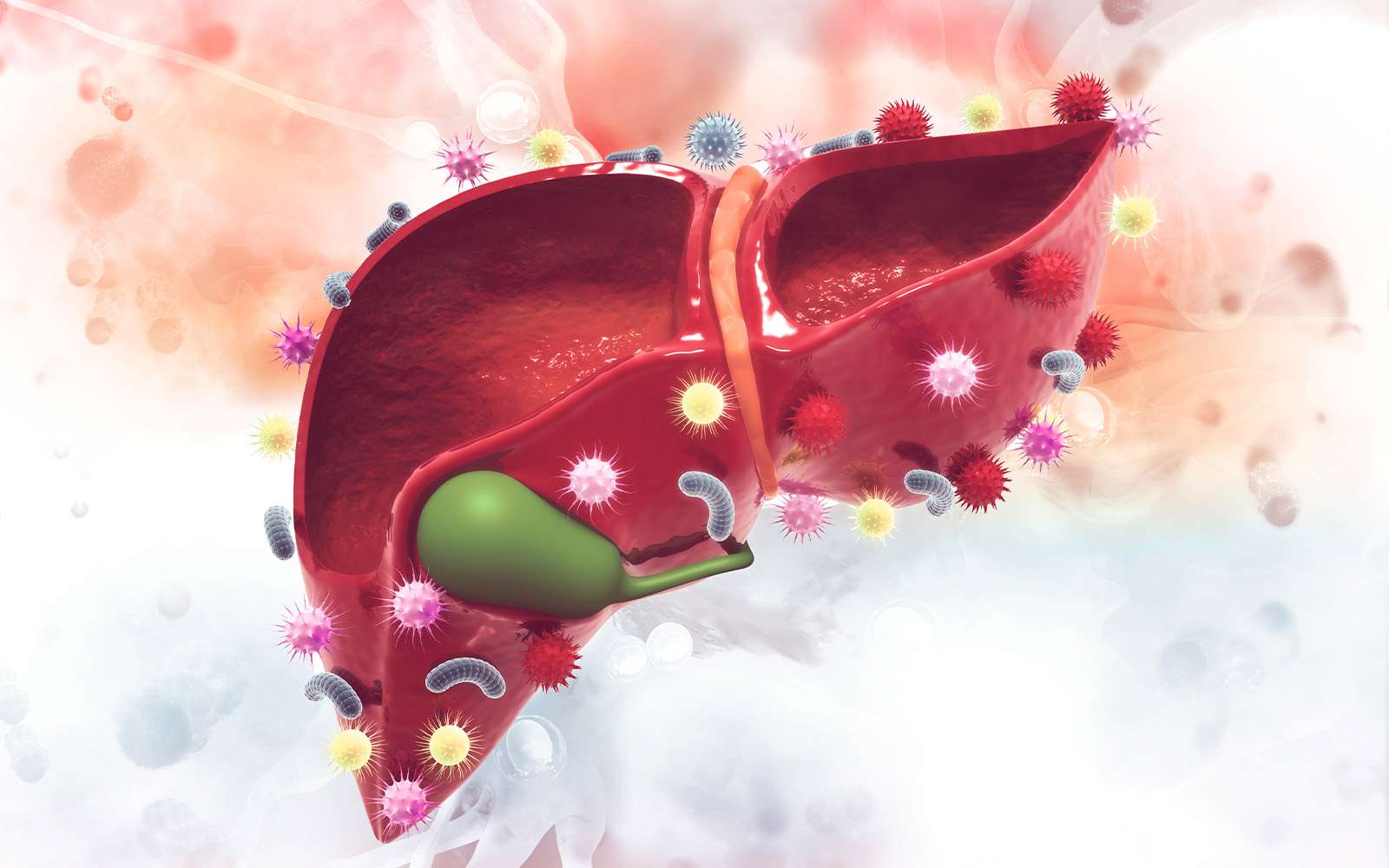 Learn more about how our biomarkers can be used to distinguish between healthy and diseased, monitor disease activity, understand pharmacodynamics and identify population responding to treatment.

How is immune-mediated liver disease treated?
In most patients, autoimmune hepatitis cannot be cured, so the disease is controlled by the use of immunosuppressive drugs. Autoimmune hepatitis is treated with immunosuppressive drugs such as prednisone and azathioprine. Primary biliary cholangitis is treated with ursodeoxycholic acid (UDCA) and obeticholic acid. Response to treatment is monitored by biochemical testing, particularly serological alkaline phosphatase (ALP) and total bilirubin. Currently, there is no specific treatment for primary sclerosing cholangitis. However, studies have shown that UDCA can slow disease progression by increasing bile acid flow and reducing inflammation.

How is immune-mediated liver disease diagnosed?
Diagnosis of autoimmune hepatitis is based on histologic abnormalities, clinical and biochemical findings, and the presence of autoantibodies. The diagnosis of primary biliary cholangitis requires the presence of at least two of the following criteria: a) biochemical evidence of cholestasis (i.e., high levels ALP), b) presence of antimitochondrial antibodies, and c) histopathologic evidence of cholangitis and bile duct destruction. Primary sclerosing cholangitis is diagnosed by a combination of symptoms, biochemical tests, and imaging of the bile ducts called a cholangiogram. In addition, a liver biopsy may be required to confirm the diagnosis and assess the severity of the disease.

THE MEDICAL NEED FOR BIOMARKERS IN IMMUNE-MEDIATED LIVER DISEASES

There is an urgent need for novel biomarkers of liver disease that can adequately determine the risk of disease progression and the likelihood of response to treatment. Fibrosis is a key histologic feature of immune-mediated liver disease; however, the severity of liver fibrosis is primarily determined by liver biopsy. The use of serological biomarkers offers a novel alternative for determining and monitoring the severity of liver fibrosis and the dynamics of ongoing fibrotic processes. Nordic Bioscience's serum biomarkers offer an accurate liver fibrosis biomarker panel that provides information on disease progression.

Since the development of cirrhosis is a common endpoint of all chronic liver diseases, the inclusion of fibrosis biomarkers in the field of immune-mediated liver disease could address several unmet needs. Such biomarkers could be used as early determinants for the treatment of diseases such as primary biliary cholangitis. In addition, Protein Fingerprint biomarkers of liver function have shown prognostic value in chronic liver diseases and could be used to determine the risk of disease progression and the likelihood of response to treatment.

Visit our liver biomarker portfolio and choose a panel that fits your clinical research or drug development targets!

Twenty types of collagen have been identified in the liver, and their localization reflects their function. Fibrillar collagens (such as type I, III, and V collagens) are located around the portal tract and the walls of the central veins and provide structural support. Basement membrane collagens, such as type IV collagen, are found in a network in the walls of the sinusoids.

The different types of immune-mediated liver diseases each have different histological fibrosis patterns, which is due to differences in the underlying pathology and targets. Consequently, there are also different serological profiles for the different diseases. For example, while all immune-mediated liver diseases have high turnover, basement membrane matrix turnover is more pronounced in primary biliary cholangitis than in primary sclerosing cholangitis.

These data, presented by Nielsen et al. at AASLD (2017), demonstrate the different collagen profiles of the various immune-mediated liver diseases. 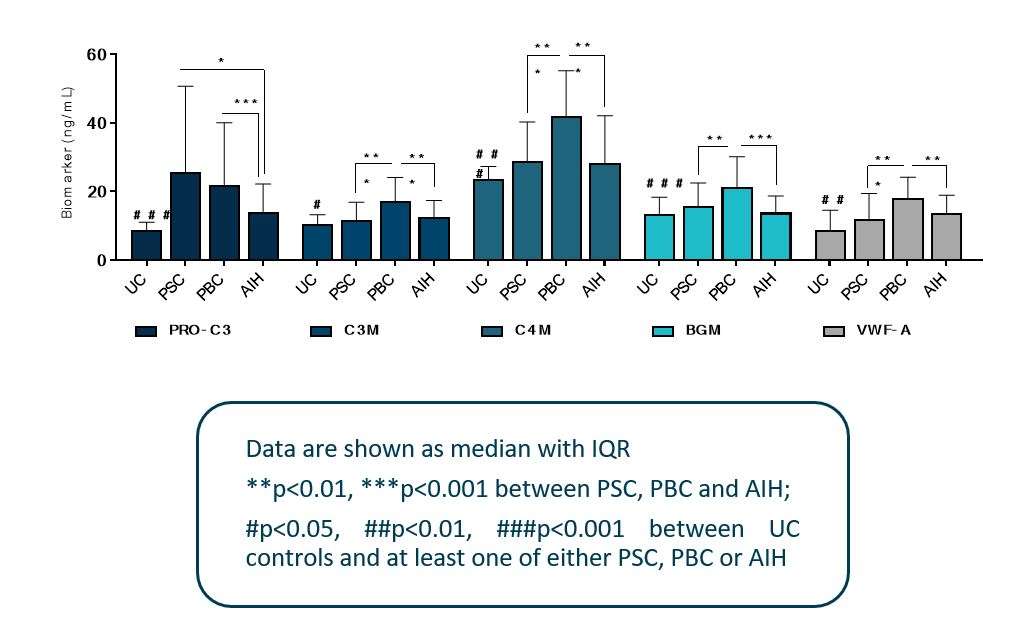 Protein Fingerprint biomarkers related to UC and at least one of either PSC, PBC or AIH

Protein Fingerprint biomarkers such as PRO-C3 have been shown to correlate with key factors such as bile acids in immune-mediated liver disease primary sclerosing cholangitis (Hirschfield et al. at EASL 2019). 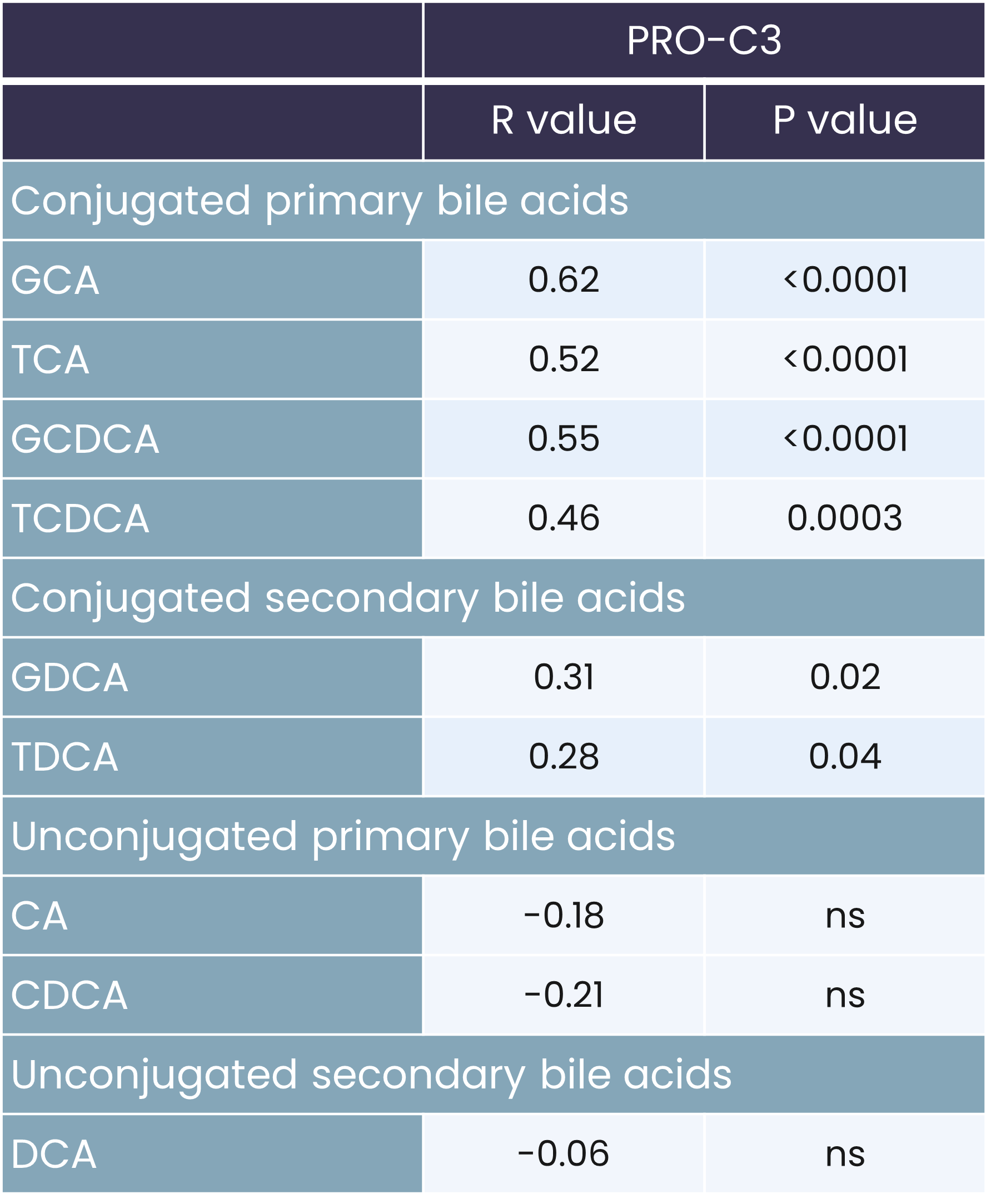 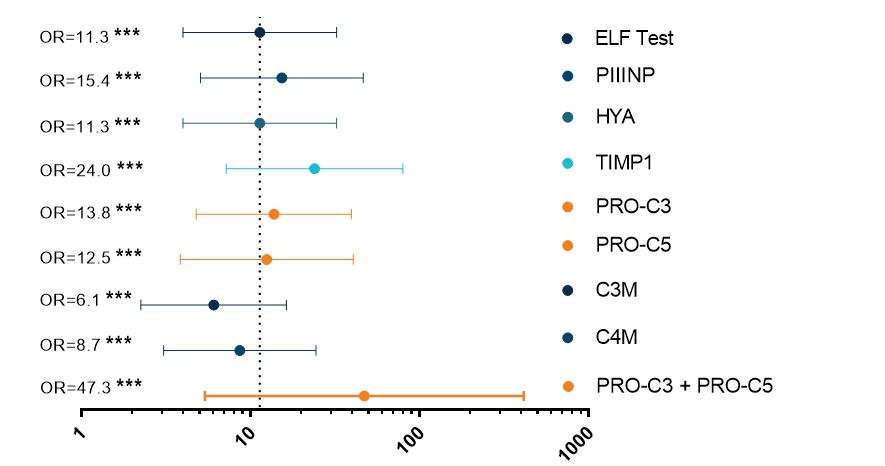 Protein Fingerprint biomarkers allow pharmacodynamic profiling of novel treatments by directly measuring protein fragments in a serum sample, as demonstrated by Hirschfield et al. (2019), who demonstrated a rapid and sustained effect of treatment with aldafermin in primary sclerosing cholangitis patients.

Change in PRO-C3 after aldafermin treatment

Patients with high fibrogenesis are more likely to respond to therapy, as shown by Hirschfield et al (2019), who found that primary sclerosing cholangitis patients treated with aldafermin whose baseline PRO-C3 levels were ≥20 ng/mL had the greatest decrease in PRO-C3 levels.

Patients with high fibrogenesis are more likely to respond to therapy