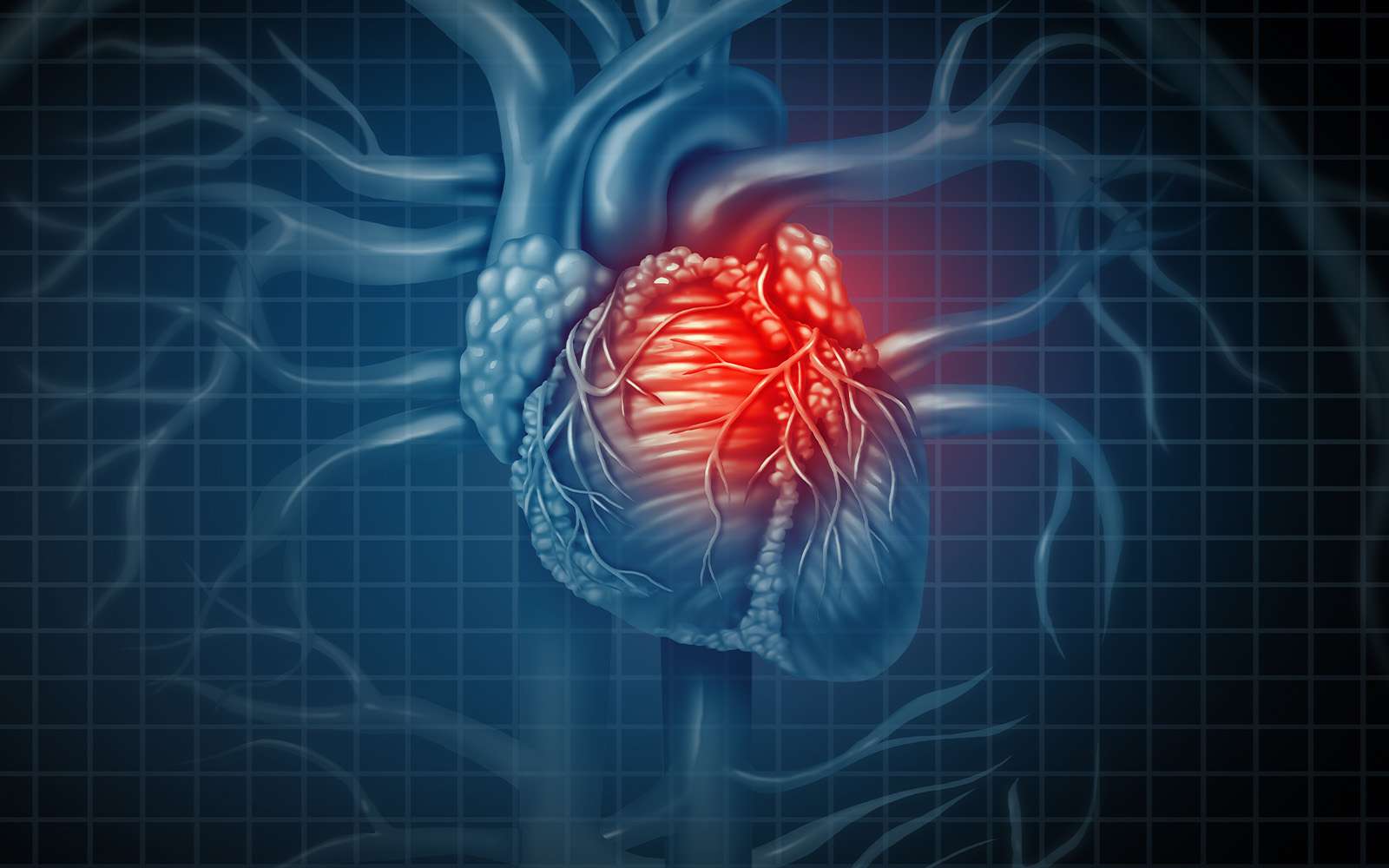 Myocardial infarction, or MI, is the most common result of coronary heart disease, and often results from atherosclerotic plaque rupture. The rupture of a coronary atherosclerotic plaque can block or dramatically restrict the blood flow to the myocardium, causing parts of the myocardium to become infarcted. This initiates a cascade of cellular and molecular changes that alter the tissue properties and function of the myocardium. Among these are pronounced cardiomyocyte necrosis, inflammation and increased extracellular matrix (ECM) protein formation. These processes further limit the heart’s capacity and can lead to heart failure. There are two clinical manifestations of MI, ST-segment elevation myocardial infarction (STEMI) and non-ST-segment elevation myocardial infarction (NSTEMI). STEMI leads to detectable changes in the heart rhythm using an electrocardiogram (ECG), whereas NSTEMI does not.

How many suffer from myocardial infarction?
Myocardial infarction is a frequent event in cardiovascular patients suffering from coronary heart disease, with more than 10 million events registered annually worldwide and 1.5 million cases in the United States. Myocardial infarction is considered to be the leading cause of morbidity and mortality worldwide and incidence rates are expected to increase over the coming years. STEMI occurs roughly twice as often in women compared to men, and STEMI patients generally have a worse prognosis than NSTEMI patients.

How is myocardial infarction diagnosed?
Patients experiencing MI often complain about chest pain and discomfort in the chest, shoulders and arms. Patients can also experience shortness of breath, nausea, and feeling faint. However, these symptoms are not unique to cardiovascular diseases, and further diagnostic measures are applied.

Because MI leads to tissue damage, cardiac-specific biomarkers released such as troponin and can be measured in the blood of patients. ECG is the most common non-invasive tool used for the diagnosis of myocardial infarction and it is often used repeatedly over minutes to hours to monitor changes in the cardiac rhythm after hospitalization. ECG also enables the separation of STEMI and NSTEMI. Imaging techniques, such as angiography, are also frequently used as these provide information on the heart structure and potential abnormalities.

How is myocardial infarction treated?
Early treatment of myocardial infarction is crucial for patient outcome. In general, treatment strategies aimed at unblocking the occluded artery to restore blood supply to the infarcted area(s) of the heart. Aspirin is commonly used to reduce blood coagulation and clotting, resulting in a reduction of mortality upwards of 50% in acute MI patients. Heparin, a blood thinner, is also commonly administered. Both STEMI and NSTEMI patients are treated with percutaneous coronary intervention (PCI) in combination with stents to increase blood flow through the affected artery or arteries. Following an MI, lifestyle modifications are recommended to reduce the burden of risk factors, and long-term treatment may include aspirin, beta blockers and statins.

THE MEDICAL NEED FOR BIOMARKERS IN MYOCARDIAL INFARCTION

The current diagnostic tools and cardiac biomarkers in myocardial Infarction are based on molecules released from the heart and imaging- or ECG-based methods. The most established blood-based cardiac biomarker for MI is troponin. However, there is high variability between measurement platforms, varying levels in MI patients receiving reperfusion and troponin levels in circulation do not correlate to histopathological analyses of troponin changes in MI tissue. While these diagnostic tools are effective in assessing the presence and the extent of the infarction, they do not provide information on risk prior to MI event(s).

Because myocardial infarction often is an acute event there is an imminent need for cardiac biomarkers enabling earlier detection of CHD patients at risk for MI. Events leading to MI include atherosclerotic plaque rupture, a process accompanied by increased levels of degradation of ECM proteins, such as type I and IV collagens. Furthermore, MI leads to extracellular matrix remodeling in the heart, which results in further release of ECM formation and degradation epitopes. These could provide specific information on patient outcome following MI.

Visit our cardiovascular biomarker portfolio and choose a panel that fits your clinical research or drug development targets!

As mentioned above, the processes leading to MI and the processes following MI are all characterized by differential regulation of ECM protein expression. This results in increased levels of circulating epitopes that can be measured by the Protein Fingerprint Technology. By evaluating the levels of these ECM protein fragments, specific information can be derived on the tissue homeostasis and whether the tissue appears to be healing or destabilizing. 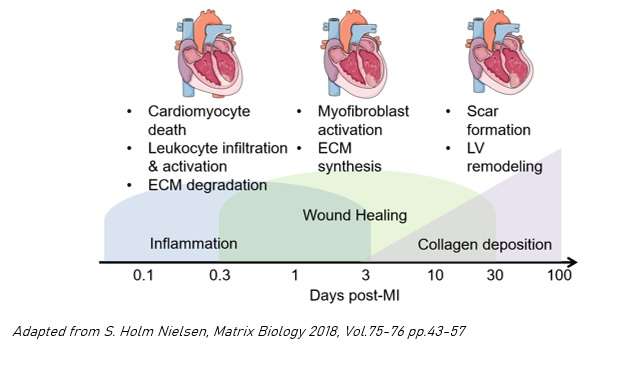 Cardiomyocyte necrosis is a common feature subsequent to MI as a result of ischemia. Due to a low regenerative capacity of the heart, the lost cardiomyocytes are replaced by ECM proteins,  a process referred to as replacement fibrosis. This leads to differential regulation of the heart's collagens, including type I, III, IV and VI collagens.

STEMI patients have significantly increased levels of formation of type III and VI collagen, and degradation of type IV collagen shortly after the event. Conversely, NSTEMI patients have significantly higher levels of type III and VI collagen degradation over time. These findings demonstrate a differential and dynamic turnover of ECM following MI.

In a study of more than 5000 post-menopausal women with 15 years follow-up, degradation of type I collagen (C1M) was significantly prognostic for development of acute MI.

Collectively, these data indicate that ECM, and in particular collagen, remodeling is important for diagnosis and prognosis in MI patients. Analyzing these biomarkers could help elucidate novel disease mechanisms and treatment strategies. 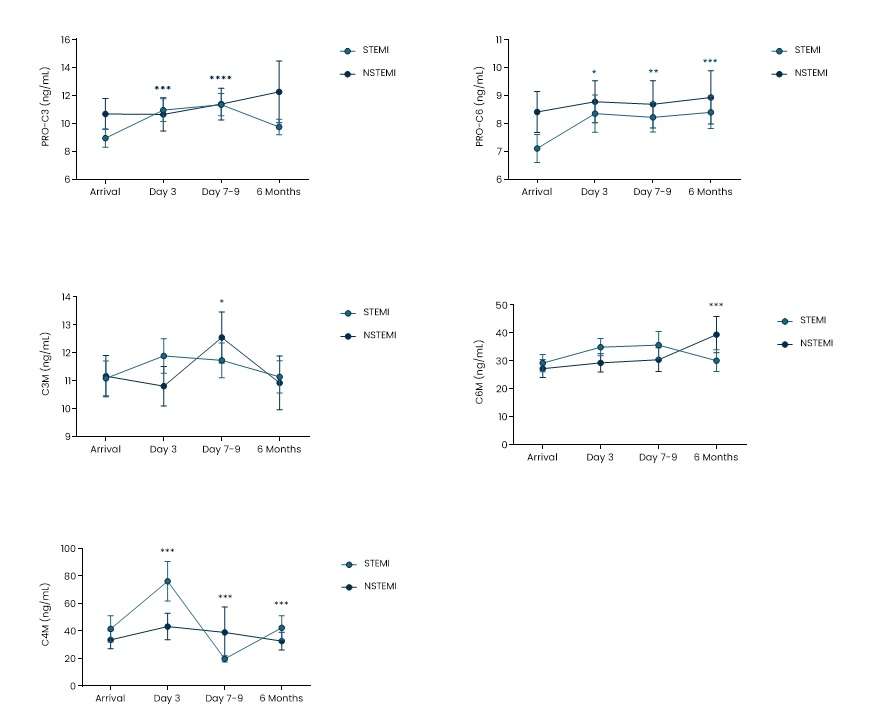 Temporal Changes of Biomarkers of Collagen Remodeling in Patients With Myocardial Infarction: The APACHE Cohort